MESSIAH AS THE BRIDEGROOM 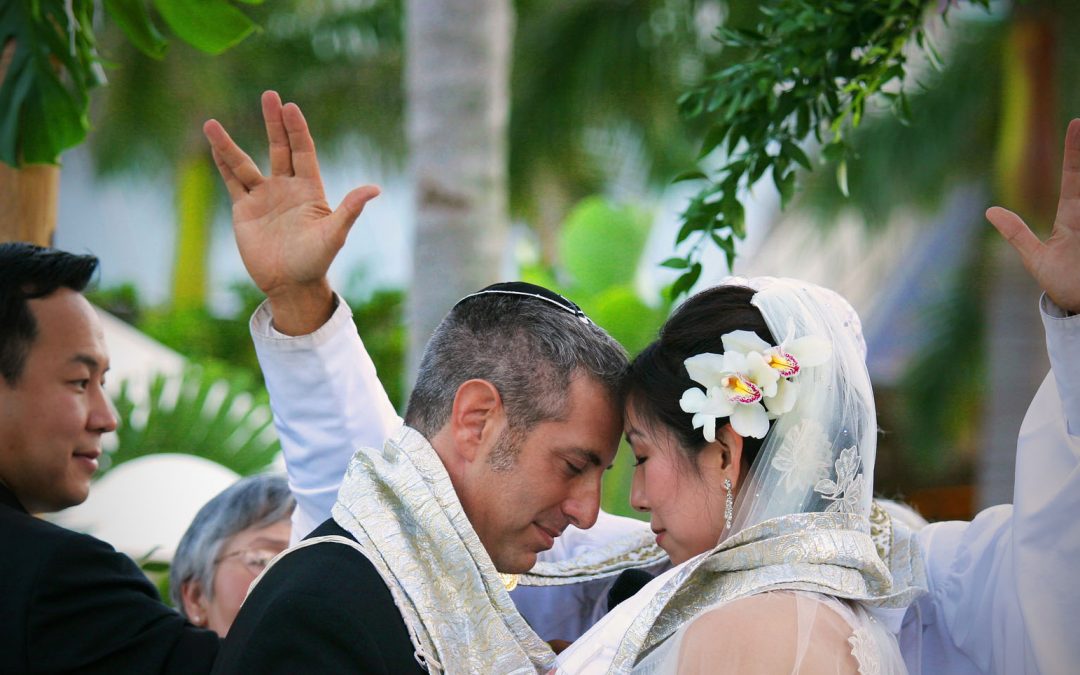 With palpable joy, the bridegroom recited the betrothal vow to his prospective bride. “Behold you are consecrated unto me with this ring according to the law of Moses and Israel.” Accompanying this statement would be two benedictions – one over wine and the other over the act of the reciting of the marriage formula. The entering into this engagement/marriage relationship was orchestrated by the parents.

Jewish customs saw the marriage ceremony in two parts. The first, briefly mentioned above, was referred to as kiddushin or erusin. In western tradition this would be what we call the engagement or betrothal of the bridegroom and bride. The second major part was referred to as nissu’in or “the marriage proper,” and sometimes was referred to as huppah, and took place at a later time period, usually about a year after the first part.

Upon completion of the first part the bride would remain in her father’s home eagerly anticipating the return of her bridegroom to complete the second part of the marriage. The groom would go back to his home and prepare a home for his bride, soon to be wife. The second part would start with the groom going to get the bride and returning to his home where the second part ceremony would occur.

The ceremony for the second part usually lasted 7 days. There was dancing, singing, feasting, and great joy by all. Even the death of a parent of either the bride or the groom on the wedding day was not allowed to interrupt the joyous occasion of the wedding. The wedding was to go on and the funeral would be the day after the wedding.

Upon completion of the nissu’in the couple are now married in all legal understandings, and able to consummate the marriage sexually and live together, which during the first part of the “marriage,” the betrothal, was not allowed.1

Bridegroom in the New Testament

The use of the term bridegroom is found in a number of passages in the New Testament. The gospel of Luke and John mention the bridegroom in relation to Jesus.

“Why do the disciples of John fast often, and make prayers, and likewise the disciples of the Pharisees; but thine eat and drink? And he said unto them, Can ye make the children of the bridechamber fast, while the bridegroom is with them?,“ Luke 5:33-35.

“I am not the Christ, but that I am sent before him. He that hath the bride is the bridegroom: but the friend of the bridegroom, which standeth and heareth him, rejoiceth greatly because of the bridegroom’s voice: this my joy therefore is fulfilled,” John 3:28-29.

The parable of the ten virgins in Matthew 25:1-13 speaks about the bridegroom in the context of Jewish marriage customs.

5 While the bridegroom tarried, they all slumbered and slept.

6 And at midnight there was a cry made, Behold, the bridegroom cometh; go ye out to meet him.

7 Then all those virgins arose, and trimmed their lamps.

8 And the foolish said unto the wise, Give us of your oil; for our lamps are gone out

9 But the wise answered, saying, Not so; lest there be not enough for us and you: but go ye rather to them that sell, and buy for yourselves.

10 And while they went to buy, the bridegroom came; and they that were ready went in with him to the marriage: and the door was shut.

Jesus as our Bridegroom

“Let not your heart be troubled: ye believe in God, believe also in me. In my Father’s house are many mansions: if it were not so, I would have told you. I go to prepare a place for you. And if I go and prepare a place for you, I will come again, and receive you unto myself; that where I am, there ye may be also,” John 14:1-3.

Jesus’ words of comfort to His disciples should be underlined and magnified in the heart and mind of every believer. In a world laden with turmoil, sin, and immoral excesses of every kind, “let not your heart be troubled.” The background of this statement, I believe, was most likely understood by His Jewish followers. They certainly would have been aware of, and attenders at, marriage ceremonies and the accompanying traditions of the times. It is believers today who are not familiar with Jewish marriage customs at the time of Jesus that miss the fullness of what Jesus was communicating.

The opening paragraphs summarized the marriage customs in Talmudic time in the Jewish world. This would have included the first century and time of Jesus and the early church. Marriage starts with the parent orchestrating the marriage. Ephesians 1:4 says, “According as he hath chosen us in him before the foundation of the world, that we should be holy and without blame before him in love.” The context of this verse shows born again, children of God being chosen by the Father in Christ. As a bride in biblical times would be “married” at the first part of the wedding ceremony and live a pure life waiting for her bridegroom, so we who are saved, the church, wait expectantly for Jesus, our Bridegroom, to come for us. We are in the engagement period. Part two of the marriage is still future.

This is why Paul wrote in 2 Corinthians 11:2, “For I am jealous over you with godly jealousy: for I have espoused you to one husband, that I may present you as a chaste virgin to Christ.”  Espoused is betrothed or engaged. He recognized that believers are set apart for Jesus. Paul’s desire was that when Jesus comes for the church, His bride, we would be like a pure, holy virgin. Presently, believers are in the engagement phase of the wedding – part 1.

As the bride we are waiting at our home, planet earth, for the return of our Bridegroom. Where has our Bridegroom gone? As John 14:1-4 says, which is analogous to the Jewish marriage customs of the day, Jesus has gone back home. He has gone back to heaven. What is He doing there? Again, similar to Jewish marriage customs, He is preparing a home in heaven for His bride, and one day will return for her. What a glorious promise and hope! No wonder, we are told “let not your heart be troubled.”

In New Testament times, the general period of time before the bridegroom returned for his bride was one year. The important concept, though, was that there were two parts to the marriage with the parts separated by a period of time. The bridegroom WILL return for the bride. This is why Acts 1:11 tell us, after Jesus went back to heaven, “…Ye men of Galilee, why stand ye gazing up into heaven? this same Jesus, which is taken up from you into heaven, shall so come in like manner as ye have seen him go into heaven.” Yes, it has been upwards of 2,000 years since our Bridegroom left. “Let not your heart be troubled,” He WILL return for His bride.

When Jesus returns, He returns in the air, 1 Thessalonians 4:14-18, and the expectant, waiting bride goes to meet Him. Jesus said, “Let not your heart be troubled.” Paul wrote in 1 Thessalonians 4:18, “Wherefore comfort one another with these words.” These two parallel thoughts are both based around the concept of the Jewish marriage customs at the time of Jesus. Understand it, internalize it, rejoice in it, and be not troubled but comforted in it! He is coming for His bride!

After Jesus has returned (in the pre-tribulation rapture, which is the only rapture view that fits this often used N.T. analogy of Jewish marriage customs), the bride of Messiah, the church, now enters into part two of the marriage ceremony in heaven, Jesus’ home. Revelation 19:7-9 declares,  “Let us be glad and rejoice, and give honour to him: for the marriage of the Lamb is come, and his wife hath made herself ready. And to her was granted that she should be arrayed in fine linen, clean and white: for the fine linen is the righteousness of saints.  And he saith unto me, Write, Blessed are they which are called unto the marriage supper of the Lamb. And he saith unto me, These are the true sayings of God.“

In Ephesians chapter five marriage is spoken of with some of the duties of the husband and wife. In the midst of this the church is compared to the wife (the bride) and Jesus as the husband (the bridegroom), verses 26-27. “That he might sanctify and cleanse it with the washing of water by the word, That he might present it to himself a glorious church, not having spot, or wrinkle, or any such thing; but that it should be holy and without blemish.”

The Church as the Bride

The Jewish marriage customs at the time of Jesus are clearly used over and over in the narrative of the New Testament. Jesus is the Bridegroom. As the cup of wine is drunk to symbolize the engagement period of the bride and groom, so has our Bridegroom, Jesus, left us the “cup of juice” used in communion to symbolize our relationship with Him. We are told in 1 Corinthians 11:26, “For as often as ye…drink this cup, ye do shew the Lord’s death till he come.” When He comes we will go to heaven and “consummate” the marriage. We will be in the presence of our Bridegroom who has been gone for a long time.

“Let not your heart be troubled!” Prepare for His return. Live as the expectant bride you are, waiting for the coming of your Bridegroom. What a day that will be! He is coming!