ISRAEL: A KINGDOM OF PRIESTS 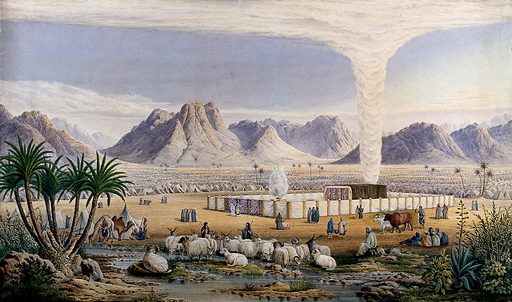 The purpose of the priesthood was to represent sinful people before a holy God. As was shown in the article, PRIEST: The Peoples Representative before God, this responsibility belonged to the Levites. The Levites themselves, though, also needed forgiveness of their sin. This is seen, for example, in the commands for the Day of Atonement recorded in Leviticus 16.

In bringing Israel into existence, God commanded the Israelites to keep His covenant, in other words to obey the commandments of the Mosaic Law. If they would keep His covenant, the nation would be a kingdom of priests. Exodus 19:5-6 (bold added) states:

5          Now therefore, if ye will obey my voice indeed, and keep my covenant, then ye shall be a peculiar treasure unto me above all people: for all the earth is mine:

6          And ye shall be unto me a kingdom of priests, and an holy nation. These are the words which thou shalt speak unto the children of Israel.

If the nation of Israel would be priests, who would they represent before God? With only one other people group in the world, Gentiles, they would have to represent Gentiles before God. The problem was that Israel did not, and could not, keep the covenant and its commandments. As Isaiah plaintively wrote, “Ah sinful nation, a people laden with iniquity, a seed of evildoers, children that are corrupters: they have forsaken the LORD, they have provoked the Holy One of Israel unto anger, they are gone away backward,” Isaiah 1:4.

God in His infinite wisdom and foreknowledge knew the Israelites, the Jewish people, would not be able to keep the Mosaic Covenant. Thus, from the very beginning God set in motion a plan, through the nation of Israel, whereby the perfect Israelite would do what the nation of Israel could not do.

In the second servant passage of Isaiah, 49:1-6, where the servant is clearly the Messiah, the servant is called ISRAEL in verse 3: “And said unto me, Thou art my servant, O Israel, in whom I will be glorified.” Why is the servant called Israel?

First, we know the servant in verse 3, though called Israel, can’t be the nation of Israel. One reason is that verse 6 tells us: “And he said, It is a light thing that thou shouldest be my servant to raise up the tribes of Jacob, and to restore the preserved of Israel: I will also give thee for a light to the Gentiles, that thou mayest be my salvation unto the end of the earth.” The servant of verse 3 will minister to BOTH Jew and Gentile.

Verse 3 is properly understood as the Messiah embodying the call and purpose of the nation of Israel to be a “kingdom of priests.” What the NATION of Israel couldn’t do, to be a kingdom of priests, God accomplished through His Servant, Jesus, who perfectly kept the Mosaic Covenant, and became the Priest for not only the Gentiles but the Jews also (see Hebrews 7-9).

Jesus is ISRAEL in the sense that He did what ISRAEL couldn’t do. In essence “Israel” in this verse is a name for Messiah who did the work the NATION of Israel couldn’t do because of their sin.

Jacob Jocz captures this truth in the quote below:

“The fates of Israel and the Messiah seem to coincide to such a degree that it is often impossible to distinguish the one from the other. Matthew reveals the same outlook when he identifies the fate of the whole of Israel with that of the child-Messiah. Edersheim is specially emphatic on the question of identification, and speaks of the Messiah as the Representative Israelite; in other words, Messiah is Israel par excellence. In the life and experience of the Messiah is Israel’s history re-enacted, but with a difference. Where Israel failed, the Messiah succeeds; what Israel was meant to be, the Messiah is – the perfect Servant of God.”

God narrowed down the call of the nation of Israel – through Abraham, Isaac, and Jacob – to that One Israelite He promised from the tribe of Judah (Genesis 49:10) and the family of David (Psalm 89). The perfect Israelite is Jesus. As the perfect Israelite, He alone could represent people, Jewish and Gentile, before a holy God.

The finality of Messiah Jesus’ work as the High Priest for Jew and Gentile is captured in Hebrews 1:3, where we are told: “…he had by himself purged our sins, sat down on the right hand of the Majesty on high.”

In the Levitical system the priests never sat down during their ministry in the Temple because their work was never finished. When Jesus “purged our sins,” He then “sat down.” Later in Hebrews, 10:12, the writer emphatically states: “But this man, after he had offered one sacrifice for sins forever, sat down on the right hand of God.”

The perfect Israelite, Jesus, in His ministry as Priest, offered the perfect sacrifice, Himself, for the sins of Jew and Gentile. Through Jesus, those who accept Him as their substitute, their sacrifice, have forgiveness of sins forever!