Communion – In light of Jewish History and Culture 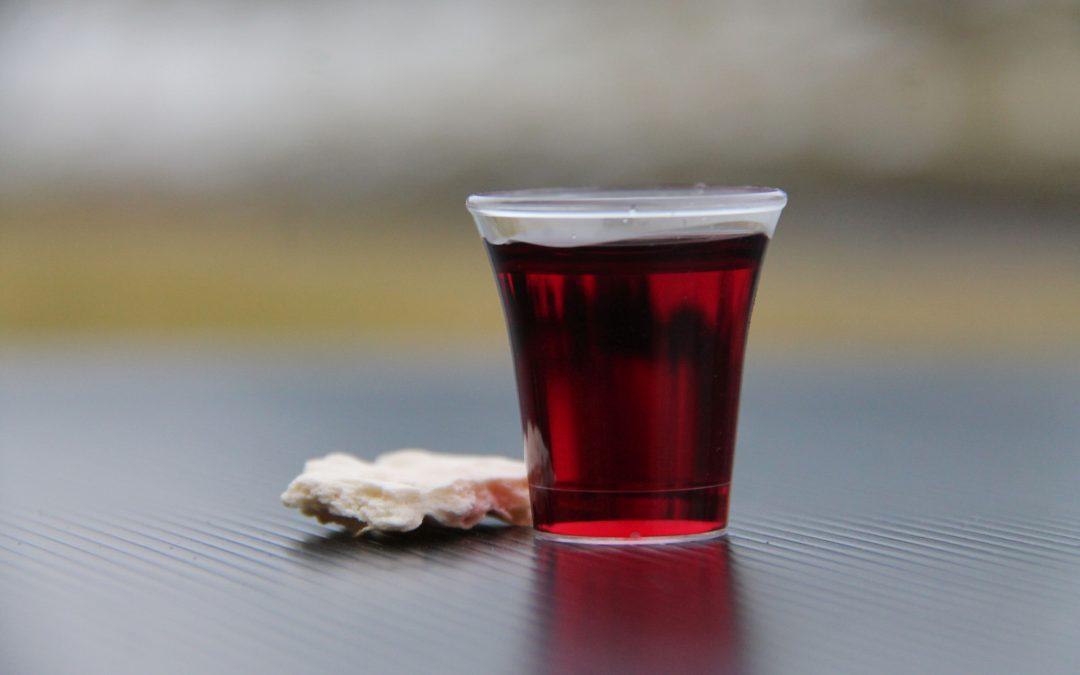 In order to understand how the first century church observed Communion, it is necessary to grasp a history of the Jewishness of the early church. The followers of Yeshua, referred to as those of the “Way,”1 never thought of themselves as anything other than Jewish people following Jesus, the prophesied Messiah. If we could go back in time and visit a first decade congregation, what would we see? How often did they observe the Lord’s supper? Was it only held at Passover season? Did they believe it was literally His body and blood? Since the Exodus Passover elements did not include grape juice, how did it get on the upper room table?

First a word about the origin of the word communion. “Koinonia is a Greek word that occurs 20 times in the Bible. Koinonia’s primary meaning is ‘fellowship, sharing in common, communion.’ Believers in Christ are to come together in love, faith, and encouragement.”2 Ground zero for the fellowship of Christians is the commonality of salvation by faith in the death, burial and resurrection of Jesus Christ our Lord as commemorated in symbols at “the Lord’s table,” an observance called “communion.” Believers partake of bread symbolizing Jesus body and grape juice which points to His sinless blood that was shed for their salvation. “The cup of blessing which we bless, is it not the communion of the blood of Christ? The bread which we break, is it not the communion of the body of Christ?”3 Those with an unbreakable relationship with God through His blood are to have unbroken communion among ourselves.

It is important to see how the synagogue served as the cradle in which the first-generation church was swaddled. “It is likely that the first Jewish believers were all attached to synagogues. It was the place where Jesus read Scripture and taught those in His community of His own mission (Luke 4:16-21). It was often the first place Paul visited on his missionary journeys (Acts 13:5,14;14:1 etc.). The ‘gentile’ churches of Paul’s day were often formed with a core of believing Jews.”4 The first believers continued attending their synagogues until they were no longer welcome. “The early church was acknowledged as a movement within Judaism…and the Jewish community related to the church as Jewish.” In (Acts 4) “leading members of the church were brought before the Sanhedrin showing that these men were identified as Jewish and as a part of a movement within Judaism…and the church both practiced their faith and evangelized from within the Jewish culture.”5 We must remember that Passover preceded the Tabernacle and the Temple and was birthed and observed in the home not the synagogue. Therefore, it was in homes that they held their first assemblies and there held communion. This continued as they were scattered abroad through persecution.

Since the only three elements of the Exodus Passover were lamb, bitter herbs and unleavened bread, how did the wine/grape juice become an element? “Based on accepted Jewish traditional practice in the time of Yeshua (Second Temple period), there had already developed the custom of four cups of wine used in the Seder.”6 Although it is not possible to determine the dates, “perhaps as long ago as the time of Ezra… the Jewish sages divided the Seder in half by including the four cups of wine in the ritual: two before the meal and two after it.”7 “The first two looked back to the physical deliverance from Egypt and the second two looked forward to the greater deliverance that would come: spiritual redemption through the Messiah.”8 The introduction of the four cups at the Passover Seder were to “symbolize a part of God’s four-fold promise of redemption” to the Hebrew slaves.9 1. Sanctification, 2. Praise, 3. Redemption, and 4. Acceptance. These are seen in the “I will’s” of Exodus 6:6-7, “Wherefore say unto the children of Israel, I am the LORD, and I will bring you out from under the burdens of the Egyptians, and I will rid you out of their bondage, and I will redeem you with a stretched out arm, and with great judgments: and I will take you to me for a people.” (bold added). In the Seder, the first two cups and the last two cups were tied together by the center piece of “the Pascal lamb which represented the One who would become the accepted sacrifice. It is the third cup, the cup of redemption, taken after the meal which Yeshua/Jesus used to proclaim Himself.”10 Jesus used an extra-biblical symbol of rabbinic origin as the center piece of the communion elements to point to his impending establishment of the New Covenant promised to Israel in Jeremiah 31. While all in the upper room obviously obeyed God’s strict command and partook of the roasted pascal lamb, after this night, it became an unmentioned side dish in light of His preeminence as “the Lamb slain from the foundation of the world.”11

One might reason that, if there were four cups on the table at the last supper, certainly they would have been mentioned in the Gospel texts. Two are mentioned in Luke 22, one before the meal and one after. This passage is almost never used as the text of a communion service. “And he took the cup, and gave thanks, and said, Take this, and divide it among yourselves.”12 And then Jesus mentions a second one, “Likewise also the cup after supper, saying, This cup is the new testament in my blood, which is shed for you.”13 These two cups are a clue to the common use of the four cups. The first one, Luke 22:17, is most likely the first cup of the evening, known as the Kiddush or the cup of sanctification. The second one in this passage is the cup of redemption, the 3rd cup in the Passover. It is the one with which He clearly establishes His sacrificial blood as the key element symbolized in the Christian Communion: “the Lamb of God which taketh away the sin of the world.”14 Until Jesus changed the focus of the symbol from the Exodus Passover to the Calvary Passover, the symbols looked back to shadows that could only temporarily cover but never remove their sin.

What was the frequency of the observance of communion in the first century? Jesus commanded, his Jewish disciples in the upper room in Jerusalem “this do in remembrance of me.” Paul inspired by the Holy Spirit to a primarily Gentile church of disciples in Corinth added the phrase, “as oft as ye…”15 This left the scheduling up to the discretion of the elders, whom he had ordained in every city. Paul never mandated the annual schedule for Passover as a limit for the observance of communion. He rebuked its misuse; “For in eating every one taketh before other his own supper: and one is hungry, and another is drunken…What shall I say to you? shall I praise you in this? I praise you not.”16 He stressed the prerequisite of the individual’s sanctity. “Wherefore whosoever shall eat this bread, and drink this cup of the Lord, unworthily, shall be guilty of the body and blood of the Lord.17

The overwhelming Jewish majority in the first century church and the Passover origin of Communion firmly rules out the heresy of  transubstantiation – (in the Roman Catholic Church,) ie: “the conversion of the substance of the Eucharistic elements into the body and blood of Christ at consecration, only the appearances of bread and wine still remaining.”18 Repeatedly the Law of Moses forbade Jews from eating/drinking of blood. The Apostles at the very first church council in Jerusalem gave their ruling regarding believing Gentiles in relation to the Mosaic laws. “Wherefore my sentence is… that they abstain from pollutions of idols, and from fornication, and from things strangled, and from blood.”19 This command was not given for the benefit of Jewish believers, because the very idea was antithetical to Mosaic Law. The idea of the elements becoming Christ is of satanic origin, for it effectively replaces Jesus as the only “sacrament.” It controls participants through fear of hell if they don’t submit to the hierarchy of a man-made religious system with a perverted gospel.

Were there differing ecclesiastical restrictions initially? “Churches that practice “open” communion invite all professed believers in Christ to join them in observing the ordinance. Churches that practice “closed” communion limit involvement in the Lord’s Supper to their own local body—only official members in good standing are allowed to partake.”20 Both make a case for their position textually, and are accountable to the Lord in their choice of inclusiveness or exclusiveness, as long as they are not violating scriptural prohibitions. The New Testament church had a clear minimal standard requiring that participants are born-again, baptized believers, living in fellowship with their Lord and one another, and in obedience to His commands. Believers are free and responsible to examine their own lives.21 Paul, the Apostle to the Gentiles, in addressing separation from idolatry to the Gentile Church of Corinth, makes an enlightening illustration from Israel in relation to communion. “The cup of blessing which we bless, is it not the communion of the blood of Christ? The bread which we break, is it not the communion of the body of Christ? For we being many are one bread, and one body: for we are all partakers of that one bread. Behold Israel after the flesh: are not they which eat of the sacrifices partakers of the altar? But I say, that the things which the Gentiles sacrifice, they sacrifice to devils, and not to God: and I would not that ye should have fellowship with devils. Ye cannot drink the cup of the Lord, and the cup of devils: ye cannot be partakers of the Lord’s table, and of the table of devils. Do we provoke the Lord to jealousy?”22   Partakers of the symbols of Christ’s sacrifice after salvation are to take seriously the table which commemorates our Lord’s death. Paul likely was alluding to the emphasis of the fourth cup in the Passover Seder which eagerly anticipates Messiah’s coming, when he used the phrase, “till he come.”23 God knew that communion was essential for consecration to Christ by “oft” contemplating His cross and His coming.