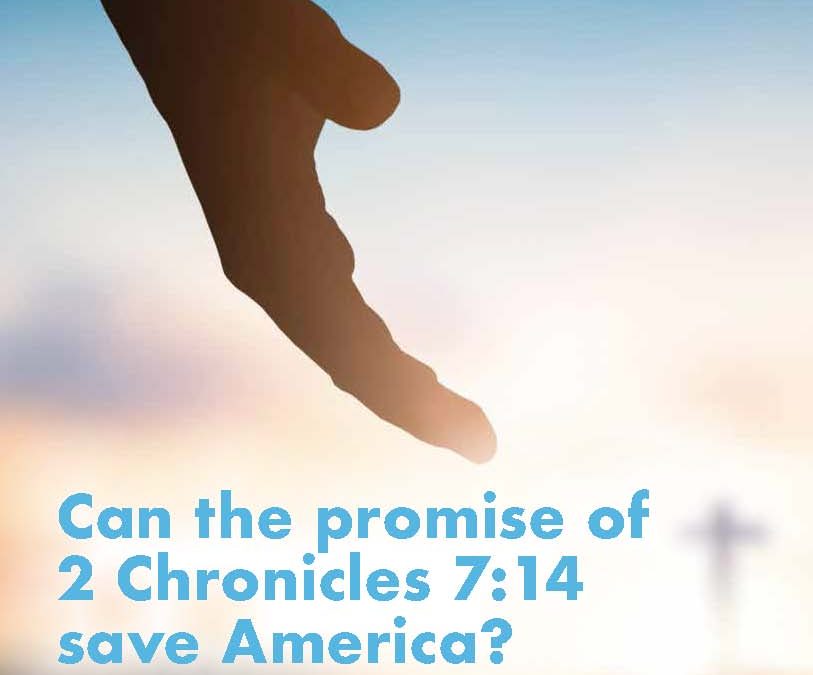 With the victory of Joe Biden as President and the Democrat control of both houses of Congress, the U.S.A. faces a bleak future. Socialism/Marxism is winning battles, and it most likely won’t be long before they win the war, introducing a progressive, leftist anti-Christian agenda to America. Talk is rampant about civil war, secession, and the like.

In September 2020, a National and Global Day and Movement of Prayer and Repentance on the National Mall in Washington D.C. was led by Jonathan Cahn who issued a “prophetic announcement” of “The Return.” On the website it states under WHY?: “America has in great measure departed from God and His ways. We have forgotten the Rock upon which we were founded. And we have removed Him from our public squares, our culture, and our lives. It is written in the Scriptures that righteousness exalts a nation but sin is a reproach to any people and, further, that the ways of unrighteousness lead to judgment. But the Scriptures also set forth that God is love and abounding in mercy and that all who come before Him to seek for His mercy will find it – and that in repentance and return will come forgiveness, salvation, healing, revival, and restoration. It is upon that foundation that this promise is given: ‘If My people who are called by My name, will humble themselves and pray and seek My face and turn from their sinful ways, I will hear from heaven, I will forgive their sin, and I will heal their land.’” [bold added]

The oftentimes appeal to 2 Chronicles 7:14 by many in our nation and the leaders of “The Return” (most of whom are charismatic) for the healing of America must be analyzed in its scriptural context. Does 2 Chronicles 7:14 provide a prescription for any nation’s healing? Is “The Return” based on emotional sentiment, at best, but false and misleading exegesis? Or, is it a biblically justified approach for the healing of the U.S.A.?

When considering any scripture verse, the reader must put it into context. Who is the writer speaking to, what are the requirements, if any, how is a promise attained, are some of the questions to be considered. The context of 2 Chronicles 7:14 starts in the previous chapter. 2 Chronicles 7:1 tells us:

“Now when Solomon had made an end of praying, the fire came down from heaven, and consumed the burnt offering and the sacrifices; and the glory of the LORD filled the house.”

Solomon’s “end of praying” was the prayer of chapter 6 for the dedication of the Temple. Notice the context of chapter six. Over and over, the people of Israel (highlighted in bold) are being addressed.

“…blessed the whole congregation of Israel.” Vs. 3

“…have chosen David to be over my people Israel.” Vs. 6

“And if thy people Israel be put to the worse before the enemy, because they have sinned against thee; and shall return and confess thy name, and pray…” vs. 24

“…forgive the sin of thy people Israel, and bring them again unto the land which thou gavest to them and to their fathers. Vs. 25

“…they have sinned against thee; yet if they pray toward this place, and confess thy name, and turn from their sin…” vs. 26

“…forgive the sin of thy servants, and of thy people Israel…” vs. 27

Yet if they…turn and pray unto thee in the land of their captivity, saying, We have sinned…” vs. 37

“…forgive thy people which have sinned against thee.” vs. 39

It is imperative that we recognize Solomon’s prayer is for the nation of Israel, no other nation. Although, there may be scriptures that can be applicable for a believer’s life, there is no biblical justification to apply Solomon’s prayer, and the promise of 2 Chronicles 7:14, to the U.S.A. or any other nation.

In Solomon’s prayer there are two covenants that are referenced. Both are important in understanding the context of chapter 7 and the promise of 2 Chronicles 7:14. The first covenant is mentioned in verse 14.

“And said, O LORD God of Israel, there is no God like thee in the heaven, nor in the earth; which keepest covenant, and shewest mercy unto thy servants, that walk before thee with all their hearts”

God, “which keepest covenant,” refers to the Mosaic Covenant. For example, when God promises a New Covenant in Jeremiah 31:31-34, we are told that Israel was unfaithful in obeying the Mosaic Covenant, vs. 32, but God was faithful in keeping His part of the covenant. The surrounding context of chapter 6 is the promise of blessing and cursing which is dependent on the obedience or disobedience of Israel – cf. Deuteronomy 28:1-14 for blessings and 28:15 and following for cursings.

There was the promise of blessing for Israel if they followed the commands of the Mosaic Covenant. This didn’t require perfection, just as perfection is not required for born-again believers today as they follow the Lord and receive His blessings, but that a majority of the nation would be sincere followers of Jehovah.

The second covenant is found in verse 16.

“Now therefore, O LORD God of Israel, keep with thy servant David my father that which thou hast promised him, saying, There shall not fail thee a man in my sight to sit upon the throne of Israel; yet so that thy children take heed to their way to walk in my law, as thou hast walked before me.”

28        My mercy will I keep for him for evermore, and my covenant shall stand fast with him.

32        Then will I visit their transgression with the rod, and their iniquity with stripes.

33        Nevertheless my lovingkindness will I not utterly take from him, nor suffer my faithfulness to fail.

Notice that God’s covenant with David (vs. 35) is eternal (vs. 28), not dependent on Israel being obedient to God (vs. 30 – 34), and that the throne of David will last forever (vs. 36) based on God’s faithfulness, His word, and His holiness (vs. 33-35). The unconditional nature of the Davidic Covenant is consistent with the unconditional nature of the Abrahamic Covenant, Genesis 12:1-3, where the “seed” promise, amplified in the Davidic Covenant, is first found.

The two covenants are important for understanding 2 Chronicles 7:14. The Mosaic Covenant was conditional and the Davidic Covenant is unconditional.

Verses 2 – 11 record all that took place at the conclusion of Solomon’s prayer. In summary, here is what occurred.

*          The nation of Israel fell down upon seeing the fire and the glory of God and praised and worshipped – vs 3.

*          When the celebration of Tabernacles was finished all the people (the nation) went to their dwellings rejoicing in their hearts and with praise to the LORD – vs. 10.

*          Solomon had finished building the Temple and his dwelling and all he desired in building was now accomplished- vs. 11.

After the dedication of the Temple, the celebration of Tabernacles, and the statement that all that Solomon desired for God’s house and his own became reality, the LORD appears to Solomon. Don’t miss this transition and its importance. God appears to Solomon that night and tells him, He has heard his prayer of chapter 6 and has chosen the Temple in Jerusalem for Himself and the place of sacrifice.

“And the LORD appeared to Solomon by night, and said unto him, I have heard thy prayer, and have chosen this place to myself for an house of sacrifice,” vs. 12.

A summary of Solomon’s prayer in chapter 6 can be divided, broadly, into two parts. Verses 1-11 deal with the historical background of Solomon building what was initially the desire of David. These verses remind us that God chose Jerusalem as His city, the line of David to be her kings, and the His house, the Temple, to be built in Jerusalem. In verses 12-42, Solomon prayed for:

In verse 13, God reminds Solomon that if “the land” (of ISRAEL) receives drought, locusts, or pestilence it is because “my people” (the NATION of Israel) have brought it upon themselves because of their sin. The three judgments are some of the “cursings” for not obeying the Mosaic Covenant – drought (Deuteronomy 28:24); locusts (Deuteronomy 28:38,42); pestilence (Deuteronomy 28:21).

“If I shut up heaven that there be no rain, or if I command the locusts to devour the land, or if I send pestilence among my people;”

With the impetus on the nation to follow Jehovah and faithfully keep His law, verse 14 has another conditional “if.”

‘If my people, which are called by my name, shall humble themselves, and pray, and seek my face, and turn from their wicked ways; then will I hear from heaven, and will forgive their sin, and will heal their land.”

God reminds Solomon of his prayer in chapter 6 concerning the people of Israel and the land of Israel. “If my people (the Jewish people, the NATION of Israel) which are called by my name (“You only have I known of all the families of the earth,” Amos 3:2)” speaks of the unique relationship between God and the nation/people of Israel. If the NATION of Israel (no other nation has this promise), humble themselves, pray, seek God’s face, and repent, then God will heal the land of ISRAEL (from the curses of disobedience in the Mosaic Covenant). Israel’s disobedience brought curses, as God promised, so Israel’s repentance will bring blessing. The two objects in this verse, “my people” (NATION of Israel) and “their land” (land of ISRAEL) relegate this promise only to the people and land of Israel.

In verses 15 – 18, God says that He will hear the prayer of the nation and if Solomon obeys God there will be blessing for Israel and his leadership. But, notice the warning at the end of chapter 7 to Solomon.

19        But if ye turn away, and forsake my statutes and my commandments, which I have set before you, and shall go and serve other gods, and worship them;

21        And this house, which is high, shall be an astonishment to every one that passeth by it; so that he shall say, Why hath the LORD done thus unto this land, and unto this house?

22        And it shall be answered, Because they forsook the LORD God of their fathers, which brought them forth out of the land of Egypt, and laid hold on other gods, and worshipped them, and served                them: therefore hath he brought all this evil upon them.

If Solomon sins, leading Israel into sin, God will judge them by removing them from His land (the land of ISRAEL). This will be the penalty (or cursing) of the Mosaic Covenant (Deuteronomy 28:63-64).

The context of 2 Chronicles 7:14 is for the NATION of ISRAEL, as God’s covenant people, and the LAND of ISRAEL. It is a promise (and a warning) only to the NATION of ISRAEL. It is also important to notice that the promise of 2 Chronicles 7:14 was if the entire NATION responded (not necessarily every individual but the majority of the NATION). When Christians appeal to 2 Chronicles 7:14 they are asking for a small segment of the U.S.A. (Christians) to respond. This alone precludes this verse being used for the U.S.A. or any other nation for that matter. The promise of 2 Chronicles 7:14 sees its ultimate fulfillment at the end of the Tribulation period when both the Mosaic and the Abrahamic Covenant come to pass. This is seen in the Land promise to Israel found in Deuteronomy 30:1-9.

The promise of 2 Chronicles 7:14 can’t save the U.S.A. because it is not for any country other than Israel. The biblical understanding of the U.S.A. is that we are not in end-time prophecy, undergoing God’s judgment now, and destined for destruction as a nation. My view is that America is done, “toast,” and God’s judgment upon her is evident and the time of her demise is near.