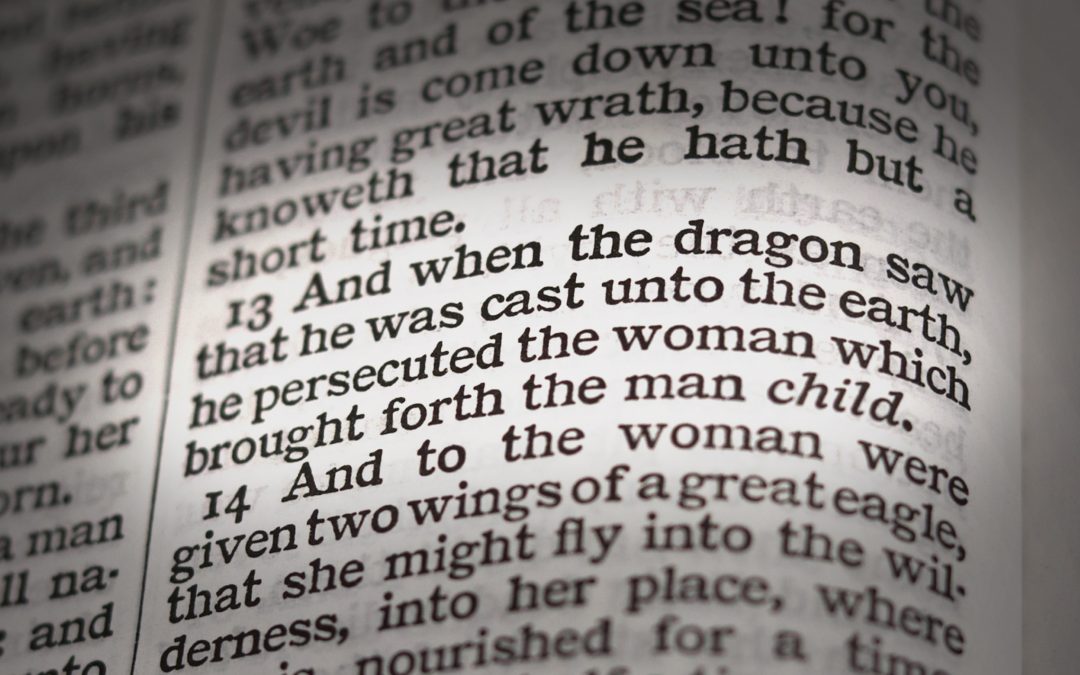 by Mark Robinson | Perhaps the seminal passage in regards to anti-Semitism and Bible prophecy is found in the twelfth chapter of the book of Revelation. The chapter deals with Israel and the Jewish people at the mid-point of the seven year Tribulation period. The chapter is filled with imagery – a woman, a man child, a dragon, a serpent, the Lamb, etc. In no way is this chapter to be understood allegorically because of the images. Each of the images are explained.

A number of these images are seen in Revelation 12:13
“And when the dragon saw that he was cast unto the earth, he persecuted the woman which brought forth the man child.”

The dragon is Satan. “And the great dragon was cast out, that old serpent, called the Devil, and Satan, which deceiveth the whole world: he was cast out into the earth, and his angels were cast out with him,” Revelation 12:9.

The woman is first mentioned in verse 1 of chapter 12. “And there appeared a great wonder in heaven; a woman clothed with the sun, and the moon under her feet, and upon her head a crown of twelve stars.” The similarity between this description and the description that Joseph gave of his father Jacob (Israel) and his mother and their children, Genesis 37:9-11, establish the woman as Israel.1

Furthermore, verse five tells us the woman “brought forth a man child, who was to rule all nations with a rod of iron: and her child was caught up unto God, and to his throne.” This man child can be none other than Jesus.

What we learn from Revelation 12:14 is that in the middle of the Tribulation period, Satan and his demons are cast out of heaven and relegated solely to earth. We know it is in the middle of the seven year Tribulation period as Revelation 12:14 says, “And to the woman were given two wings of a great eagle, that she might fly into the wilderness, into her place, where she is nourished for a time, and times, and half a time, from the face of the serpent.” A time is 1, times is 2, and half a time is ½ or 3½ total. Additionally we are told in Revelation 12:6, “And the woman fled into the wilderness, where she hath a place prepared of God, that they should feed her there a thousand two hundred and threescore days.” A thousand two hundred and threescore is 1,260. With a biblical/Jewish year being 360 days the 1,260 days equates to 3½ years, the middle of the 7 year Tribulation.

It is in this last 3½ year period that anti-Semitism reaches its world-wide pinnacle, “Therefore rejoice, ye heavens, and ye that dwell in them. Woe to the inhabiters of the earth and of the sea! for the devil is come down unto you, having great wrath, because he knoweth that he hath but a short time. And when the dragon saw that he was cast unto the earth, he persecuted the woman which brought forth the man child,” Revelation 12:12-13.

Anti-Semitism is an age-old hatred. Many books have been written about its cause. Dennis Prager and Rabbi Joseph Telushkin co-authored a book in 2003 titled, Why the Jews? The Reason for Anti-Semitism. Prager, especially, is a conservative, reasonable voice in a leftist America gone mad. In their initial chapter, Why Jew-Hatred Is Unique, they make the following comments.

“How are the universality, depth, and permanence of antisemitism to be explained? Why such hatred and fear of a people who never constituted more than a small minority among those who most hated and feared them? Why, nearly always and nearly everywhere, the Jews?

“Many answers have been offered by scholars. These include, most commonly, economic factors, the need for scapegoats, ethnic hatred, xenophobia, resentment of Jewish affluence and professional success, and religious bigotry. But ultimately these answers do not explain antisemitism; they only explain what factors have exacerbated it and caused it to erupt in a given circumstance. None accounts for the universality, depth, and persistence of antisemitism. In fact, we have encountered virtually no study of this phenomenon that even attempts to offer a universal explanation of Jew-hatred. Nearly every study of antisemitism consists almost solely of historical narrative, thus seeming to indicate that no universal reason for antisemitism exists.

“The answer is Judaism, its distinctiveness and its challenges, and we have offered four reasons [the Jews’ God, laws, peoplehood, and claim to being chosen] why this is so.”
The above quote gives a good overview of many of the suggestions for the root-cause of anti-Semitism. Dennis Prager is an orthodox Jew. He teaches the Tenach and believes it is the Word of God. But, though Prager’s and Teluskin’s reasons might be better than the others mentioned, it is not correct.

“The universality, depth, and persistence of antisemitism” is found in one word, or more correctly, one spiritual being: Satan. Anti-Semitism is the result of Satan’s desire to destroy God’s plan for the world. God’s plan is based in the nation of Israel and the Jewish people. There are three basic purposes for God choosing Israel (the Jewish people).
In no particular order, first, to bring the Word of God to mankind, Romans 3:1-2. The Bible, the earlier revelation and the later revelation, referred to as the Old and the New Testament, are Jewish books written by the Jewish people.

Third, they were to be the vehicle from which the Messiah/Savior would become a man. Thus Matthew 1:1 starts, “The book of the generation of Messiah Jesus, the son of David, the son of Abraham.”

Satan has through the centuries attempted to corrupt the Word of God and cast doubt and aspersion on its credibility. He doesn’t want anyone to believe that God actually authored a book to the human race. Satan has also tried to stop the evangelization of Jews and Gentiles so that people can’t find forgiveness of sin through God’s Messiah Jesus. But, perhaps, the main effort of Satan in his attempt to destroy God’s plans for the world is to persecute and attempt to destroy the people (Jewish people) though whom Messiah would be born. If Satan can destroy the Jewish people, he can destroy God’s plans for this earth. Prior to the coming of Jesus, the Pharaohs, Haman, Antiochus Epiphanes, Herod and others tried to wipe out the Messianic line so Messiah wouldn’t be born into this world.

The anti-Semitism of the Tribulation period is Satan’s final attempt to defeat God by destroying Israel and the Jewish people.

God’s use of Anti-Semitism

1. The LORD said unto my Lord, Sit thou at my right hand, until I make thine enemies thy footstool.
2. The LORD shall send the rod of thy strength out of Zion: rule thou in the midst of thine enemies.
3. Thy people shall be willing in the day of thy power, in the beauties of holiness from the womb of the morning: thou hast the dew of thy youth.

All these points refer to the second coming of Jesus. It is at this time when He will subdue and rule over His enemies. This occurs at the day of His power, Revelation 19:11-21. Notice, that “thy people,” the Jewish people, “shall be willing,” when He returns in power. Prior to this they rejected their Messiah, Zechariah 12:9-10.

What has happened in “the day of His power” to make the Jewish people willing? Anti-Semitism! In his diabolical hatred of Israel and the Jewish people, Satan, using the Anti-Christ, has marshaled the nations of the world to come against Israel at the end of the Tribulation, Revelation 16:12-16.

The Jewish people have fled back to Israel. They have no nation to turn to as ALL nations have turned against her.
“For I will gather all nations against Jerusalem to battle; and the city shall be taken, and the houses rifled, and the women ravished; and half of the city shall go forth into captivity, and the residue of the people shall not be cut off from the city. Then shall the LORD go forth, and fight against those nations, as when he fought in the day of battle.” – Zechariah 14:2-3

It is at this time that the Lord returns as the people call on Him to save them spiritually and physically, Zechariah 12:10, Matthew 23:39.

The existence and cause of anti-Semitism is because there is a Devil (Satan), who is constantly attempting to destroy God’s plan. And, His plan is based on Israel and her people, the Jews. Satan first tried to destroy the Messianic line so Messiah would not come into the world to die for the world’s sins. Satan failed. Messiah Jesus’ death, burial, and resurrection is history. But, Satan has not stopped in his efforts to destroy Israel and the Jewish people – especially in this day, as he knows the rebirth of Israel as a nation is THE sign that the world is in the last days and the Tribulation period is not far off.

As we see anti-Semitism increase in our day it is preparing the way for the greatest anti-Semitic act of all history, including the holocaust. That day is unfolded for us in Revelation 12 where Satan, relegated to earth with his demons, goes out with a vengeance to destroy Israel and the Jewish people. It is his final attempt before he is cast into the pit for a thousand years, Revelation 20:1-3.

1. “As already indicated, the woman is the nation of Israel. This is evident for the following reasons: (1) Her description is reminiscent of Genesis 37:9-10 where these heavenly bodies, the sun and the moon, represent Jacob and Rachel. This identifies the woman with Israel and the fulfillment of the Abrahamic Covenant. (2) The 12 stars in her crown would link her to the 12 tribes of Israel or the 12 sons of Jacob, the patriarchs of Israel. (3) In verse 2 she is seen with child, one who rules with a rod of iron (vs. 5). This can be none other than Christ, who as promised in Scripture, was from the nation of Israel (Matt. 1:1-25; cf. also Psalm 2:8-9; Rev. 2:27; 19:15). (4) That she is Israel, the nation, and not simply Mary, the mother of Jesus, is clear from the fact she will be persecuted in the last half of the Tribulation (vss. 6, 13-17). So the woman is the nation of Israel, the matrix and source of Messiah.”
J Hampton Keathley III, Commentary on the Revelation, https://bible.org/seriespage/18-angelic-conflict-rev-121-17