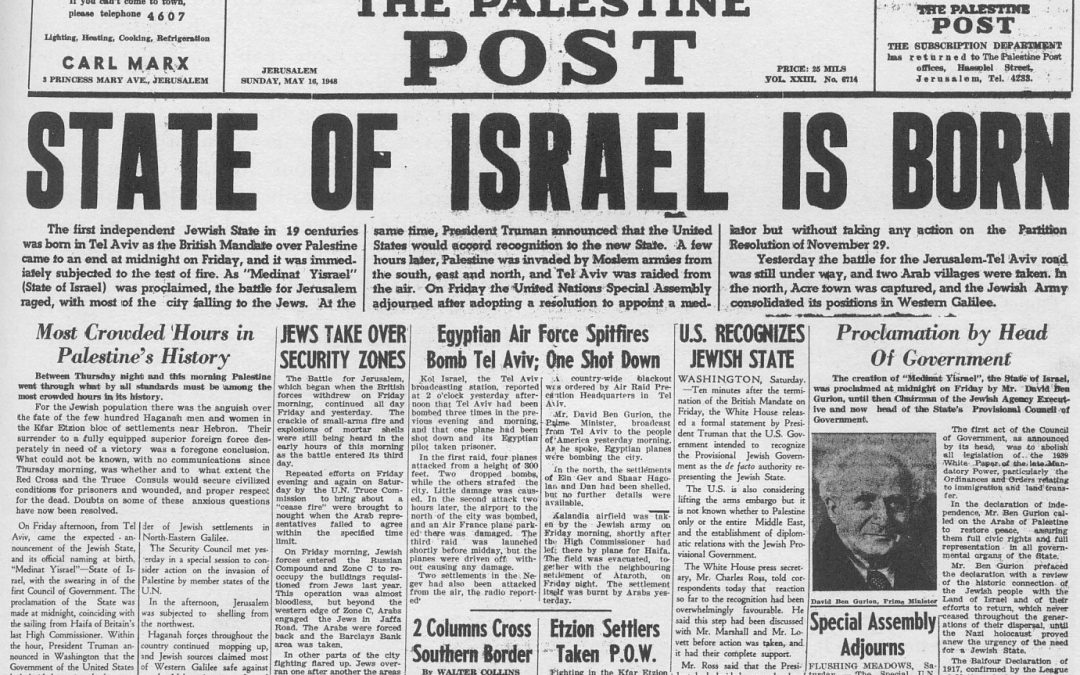 One hundred years ago, a brief 67-word statement, within a short letter, laid the foundation for the birth of the nation of Israel. Since the sending of that letter, this statement has reverberated down through the corridors of history. There has been no more important brief document in modern Middle East history than the letter written by Lord Balfour, British Foreign Secretary, on behalf of the British government.

I have much pleasure in conveying to you. on behalf of His Majesty’s Government, the following declaration of sympathy with Jewish Zionist aspirations which has been submitted to, and approved by, the Cabinet

His Majesty’s Government view with favour the establishment in Palestine of a national home for the Jewish people, and will use their best endeavors to facilitate the achievement of this object, it being clearly understood that nothing shall be done which may prejudice the civil and religious rights of existing non-Jewish communities in Palestine or the rights and political status enjoyed by Jews in any other country.

I should be grateful if you would bring this declaration to the knowledge of the Zionist Federation.

It has been 100 years since Lord Balfour sent his brief missive to Lord Walter Rothschild II. Rothschild was a British banker, active in the political scene in Britain, a zoologist, and an ardent Zionist. He never enjoyed the financial world and in 1908 left the world of banking to work with animals, his first love. He was instrumental in working with Balfour on the wording of the letter Balfour sent. This letter has become known as The Balfour Declaration.

The event that triggered WW I was the assassination of Franz Ferdinand, the archduke of Austria-Hungary by Gavrilo Princip, a Serbian nationalist, on June 28, 1914. One month later the war that would ultimately claim 17 million lives broke out.

The warring sides of this conflict were the Allied powers, led by the United States, France, Russia, Great Britain, Japan, and Italy against the Central powers which included Germany, Bulgaria, the Austrian-Hungarian Empire, and the Ottoman Empire.

WW I would not formally end until Nov, 1918, but by 1916 the Allied victory was inevitable. In May, 1916, the Sykes-Picot Agreement, authored by Sir Mark Sykes and Francois Georges Picot, between Great Britain and France, declared how the lands in the Middle East of the Ottoman Empire would be divided upon the conclusion of WW 1. Both of these countries were given mandates to establish new nation-states in the land mass of the Ottoman Empire. Britain was given the mandate over the area of Palestine, which led to Britain’s declaration in 1917 that a Jewish state/nation be established in Palestine. Four hundred years after the Ottoman Turks started their reign in Palestine, this land was now promised to the Jewish people for a national homeland.

It has often been stated that history is His Story! To one committed to an all-knowing, all-powerful, all-present (omniscient, omnipotent, omnipresent) God who created this world and is working out His plan to bring things to a consummation for His glory, it is easy to see God’s hand in the events of history. Especially in the events surrounding Israel, as she is the nation and the people (Jewish people) God has brought into existence to bring His plan to fruition, Romans 9-11.

The life of Chaim Weizman is one such providentially placed individual who helped chart the course of “His Story.” Weizman would give “legs” to the Zionist dream of Theodore Herzl. At the first Zionist Congress in Basel, Switzerland, held from August 29-31, 1897, the declared purpose was: “The aim of Zionism is to create for the Jewish people a home in Eretz Israel secured by law.” On September 3rd Herzl made the statement, “Were I to sum up the Basle Congress in a word– which I shall GUARD AGAINST PRONOUNCING PUBLICLY– it would be this: At Basle I founded the Jewish State. If I said this out loud today, I would be answered by universal laughter. Perhaps in five years, and certainly in fifty, everyone will know it.” It was 50 years later – Nov. 29, 1947 – that the U.N. officially called for the establishment of a Jewish state, Israel, in Resolution 181, in the land of Israel! Coincidental? Only to those who deny the Bible, reject the God of the Bible, and refuse to accept His plan for the world focused around Israel and the Jewish people. Herzl’s statement was prophetic!

Weizman would give life to the dream of Herzl. Weizman was born in Russia, 1874-1952, but was trained in chemistry in Switzerland and Germany. In 1905 he moved to England when he was offered a position in the Chemistry Department of the University of Manchester. In England he was elected to the General Zionist Council. The two great loves of his life – Zionism and chemistry – would be wed together, at this opportune time of history, through the providential hand of God. Weizman would invent an acetone that would be instrumental in Britain’s war efforts.

“Weizmann invented a new method for producing synthetic acetone from corn, a discovery that constituted a significant contribution to the war effort in Britain. His discovery had commercial and strategic value since acetone was essential to ammunition production, in order to produce cordite explosive propellants. Without acetone, a cloud of smoke is created whenever a cannon is fired, thereby exposing the cannon’s location. The original raw material used for acetone production was located in areas that had been conquered by Germany. Weizmann’s discovery saved the British ammunition industry from distress. He thereby gained the faith and admiration of the First Lord of the Admiralty, Lord Balfour, and the Munitions Minister, Lloyd George. Under his supervision, an industry for the production of synthetic acetone was established in Britain.”1

Weizman’s invention was a major turning point in the war. Britain wanted to reward Chaim Weizman for his discovery which was a major part of the Allied victory. Weizman wanted no personal reward. He had only one desire – that Britain would do all it could to bring about the Zionist ideal of a homeland for the Jewish people in Israel (at that time referred to as Palestine) – the desire of his heart.

The confluence of events and personalities brought together should be evident even to the most hardened sceptic. Minister David Lloyd George was elected one year earlier, December 1916, as the Prime Minister of Britain. The decision to publicly support Zionism was made under his leadership.

In little over a month after the release of the Balfour Declaration letter, Jerusalem would be liberated by the British forces. Prime Minister David Lloyd George requested of Allenby that he capture Jerusalem by Christmas of 1917. Allenby more than fulfilled his request.

On December 9, the first night of Chanukah that year, Jerusalem would fall to the British army led by Gen. Allenby. Two days earlier British planes flew over Jerusalem dropping leaflets calling for the surrender of the city. The leaflets were signed “Allenby.” The Arabic reading citizenry mistook “Allenby” for “Al-Nebi,” “the Prophet.” To these followers of Islam, “the Prophet” is Mohammed! When Allenby approached Jerusalem 2 days later, he captured the city without a shot being fired.

Allenby entered Jerusalem on Dec. 11. He purposefully dismounted his horse at the Jaffe gate and walked into the city with his men. It has been reported that Allenby, as a devout Christian, stated: “I will not as a Christian, enter the City of my Messiah mounted, when He walked.”

The liberation of Jerusalem coinciding with the first night of Chanukah and the mistaken reading of Al-Nebi for Allenby point to these providential events being used by God to further His plan for Jerusalem and the world.

What was birthed in the heart and mind of Theodore Herzl in the late 19th century and was crystallized in the events of WW I, became a reality in 1947 with U.N. Resolution 181 followed by the historic declaration on May 14, 1948 by David Ben Gurion: “Accordingly we, members of the people’s council, representatives of the Jewish community of Eretz-Israel and of the Zionist movement, are here assembled on the day of the termination of the British mandate over Eretz-Israel and, by virtue of our natural and historic right and on the strength of the resolution of the United Nations General Assembly, hereby declare the establishment of a Jewish state in Eretz-Israel, to be known as the state of Israel.”

The declaration concluded with, “Placing our trust in the ‘Rock of Israel’, we affix our signatures to this proclamation at this session of the provisional council of state, on the soil of the homeland, in the city of Tel-Aviv, on this Sabbath eve, the 5th day of Iyar, 5708 (14th May,1948).”2 It was signed by David Ben Gurion along with 36 other men and women.

This year is the 100th anniversary of the groundbreaking Balfour Declaration. The Palestinian Authority is using this anniversary year to attack this foundational declaration. The purpose of the PA campaign is to “make the international community, and especially Britain, confront their historical responsibilities and call on them to atone for this major crime committed, and raise the issue of the historical injustice inflicted on the Palestinian people.”3

The enemies of Israel and the Jewish people, like the Palestinian Authority, who deny and change history, and desire to destroy Israel and the Jewish people, are incontrovertibly, enemies of God. God orchestrated the events of the late 19th and early 20th century to pave the way for the creation of the state of Israel. Neither the Palestinians, the U.N., or the nations of the world can stop “His Story.”

God made it clear in His word that He would bring back the Jewish people from world-wide captivity into their own land, Israel, in the last days.

“Remember Abraham, Isaac, and Israel, thy servants, to whom thou swarest by thine own self, and saidst unto them, I will multiply your seed as the stars of heaven, and all this land that I have spoken of will I give unto your seed, and they shall inherit it forever.” Exodus 32:13

“For, lo, the days come, saith the LORD, that I will bring again the captivity of my people Israel and Judah, saith the LORD: and I will cause them to return to the land that I gave to their fathers, and they shall possess it.” Jeremiah 30:3

“And say unto them, Thus saith the Lord GOD; Behold, I will take the children of Israel from among the heathen, whither they be gone, and will gather them on every side, and bring them into their own land.” Ezekiel 37:21

“And I will bring again the captivity of my people of Israel, and they shall build the waste cities, and inhabit them; and they shall plant vineyards, and drink the wine thereof; they shall also make gardens, and eat the fruit of them. And I will plant them upon their land, and they shall no more be pulled up out of their land which I have given them, saith the LORD thy God.” Amos 9:14-15

Scripture has at least 170 references to the land (of Israel) being God’s eternal, covenantal gift to the Jewish people. The Balfour Declaration of 1917 was the human declaration that God used to set in motion the fulfilment of His promises. “His Story” is nearing completion. The “Rock of Israel” will bring it to pass.

Look up, for our redemption draws near! Hallelujah!

2 “Declaration of Establishment of State of Israel” http://www.mfa.gov.il/MFA/ForeignPolicy/Peace/Guide/Pages/Declaration%20of%20Establishment%20of%20State%20of%20Israel.aspx

3 “The Meaning of the Palestinians War on the Balfour Declaration”, https://www.algemeiner.com/2016/10/28/the-meaning-of-the-palestinians-war-on-the-balfour-declaration/