How were people saved in the Old Testament? 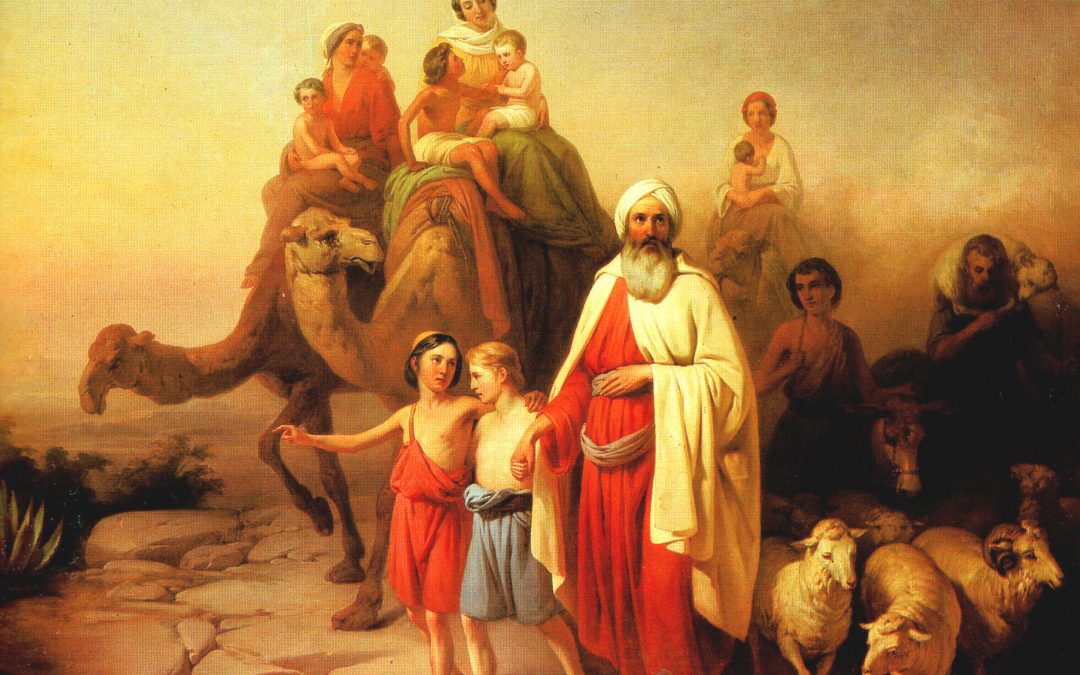 “They took him! They took your nephew!”

He was out of breath, running and panting with fear in his eyes. I can imagine in my mind’s eye how this news was received to the son of Terah. We are not told that he panicked, wept, or even flinched. We read that he “armed his trained servants …and pursued them unto Dan …and smote them, …and he brought back all the goods, and also brought again his brother Lot, and his goods, and the women also, and the people.”1

This adventure would almost assuredly dwarf any modern action hero by comparison. Abram had great strength in his faith in the one true God. With that being said, he was far from perfect. He had lied about his wife to save his own skin more than once. He also doubted God’s promise of his wife giving a miraculous birth, both of them being “well stricken in age.”2 In this instance however, we see his faith in action. He then meets and is blessed by Melchizedek, the king of Salem.

“After these things the word of the Lord came unto Abram in a vision, saying, Fear not, Abram: I am thy shield, and thy exceeding great reward. And Abram said, Lord God, what wilt thou give me, seeing I go childless, and the steward of my house is this Eliezer of Damascus? And Abram said, Behold, to me thou hast given no seed: and, lo, one born in my house is mine heir. And, behold, the word of the Lord came unto him, saying, This shall not be thine heir; but he that shall come forth out of thine own bowels shall be thine heir. And he brought him forth abroad, and said, Look now toward heaven, and tell the stars, if thou be able to number them: and he said unto him, So shall thy seed be. And he believed in the Lord; and he counted it to him for righteousness.” (Bold added)

No! No! A thousand times, no! The purpose of this article is not only to show you why that answer is a resounding “No!” but also to show you, on the positive side, how a person living before the coming of Christ obtained justification.

THE PURPOSE OF THE LAW

As you have already read in Ken Overby’s article Law and Grace, the purpose of the Law is to show us our sinfulness and need for a Savior. Romans 3:19-20 says the Law was given “…that every mouth may be stopped, and all the world may become guilty before God. Therefore by the deeds of the law there shall no flesh be justified in his sight: for by the law is the knowledge of sin.”

Any who seek righteousness, forgiveness, and justification through the Mosaic Law and Levitical system of sacrifices will find themselves obtaining only a greater knowledge of their own sinfulness. Hebrews 10:4 says “For it is not possible that the blood of bulls and of goats should take away sins.”

Keeping the Law imperfectly only brings a curse, as mentioned in Galatians 3:10, “For as many as are of the works of the law are under the curse: for it is written, Cursed is every one that continueth not in all things which are written in the book of the law to do them.”

To summarize, the Law never saves or justifies. It only condemns. In the words of Paul, it is our schoolmaster to bring us to Christ.3

ONE WAY OF SALVATION: BY GRACE THROUGH FAITH

“For by grace are ye saved through faith; and that not of yourselves: it is the gift of God: Not of works, lest any man should boast.”4 This verse might has well have been written in Genesis, because this truth has always been the means of salvation.

THE MEANS OF SALVATION – GRACE

“Moreover the law entered, that the offence might abound. But where sin abounded, grace did much more abound” – Romans 5:20

There was nothing Abram could do to earn God’s favor. It wasn’t leaving his land, being circumcised, or offering sacrifices. The Law had not yet even been given. The only way (or vehicle) for Abram to obtain any standing with God was through God’s unmerited grace. This has always been the means or vehicle for salvation – even before Christ came.

THE REQUIREMENT FOR SALVATION – FAITH

How did Abram receive righteousness? What brought him into the standing of being declared righteous in the eyes of God? One word. Faith. Not keeping commandments, not sacrifice, only belief! He believed in the promise of God! In Charles Swindoll’s The Grace Awakening, this thought is elaborated upon:

“He [Abram] had been reared by an idolater. He had married a woman who had come from the same region of idolatry. He was by birth, by nature, and by choice a sinner. However, God in sovereign grace penetrated through all of that. And when He heard Abraham say, ‘I believe,’ God in grace, credited perfect righteousness to the man’s account. The Scriptures call this ‘justification.’”5

THE OBJECT OF SALVATION – GOD

This is to say that the One from whom salvation comes is none other than God Himself. He is who designs and reveals how we are to exercise our faith in order to obtain salvation. He is the One who justifies the ungodly. He must be in the center of our redemption. He always has been the only source of saving grace. This has also never changed. Our salvation as well as that of the Old Testament saint comes from God alone.

THE BASIS OF SALVATION – THE DEATH, BURIAL, AND RESURRECTION OF JESUS

On what basis in any age or dispensation is salvation or justification provided? Only through the finished work of Christ on the cross – His death, burial, and resurrection. Nothing more, nothing less.

Speaking of this, Hebrews 10:4-12 states “For it is not possible that the blood of bulls and of goats should take away sins. Wherefore when he cometh into the world, he saith, Sacrifice and offering thou wouldest not, but a body hast thou prepared me: In burnt offerings and sacrifices for sin thou hast had no pleasure. Then said I, Lo, I come (in the volume of the book it is written of me,) to do thy will, O God. Above when he said, Sacrifice and offering and burnt offerings and offering for sin thou wouldest not, neither hadst pleasure therein; which are offered by the law; Then said he, Lo, I come to do thy will, O God. He taketh away the first, that he may establish the second. By the which will we are sanctified through the offering of the body of Jesus Christ once for all. And every priest standeth daily ministering and offering oftentimes the same sacrifices, which can never take away sins: But this man, after he had offered one sacrifice for sins for ever, sat down on the right hand of God.”

The terms “once for all” and “one sacrifice for sins forever” in reference to Jesus’ death, along with negative absolutes regarding sacrifice like “not possible” and “can never …make perfect” help us to see that it was always only Jesus’ death burial and resurrection that justifies sinners – through all time. Past, present, and future.

This has never changed, and it never will. In fact, in regards to salvation, the means (grace), the requirement (faith), the basis (death, burial, and resurrection of Jesus), and the object (God Himself) have never, and will never change.

Okay, so now that we understand that salvation was never through the Law. That it’s only been by grace through faith.  And, that it’s only based on the death, burial, and resurrection of Jesus, can we then say that “Old Testament saints were saved by looking forward to the death, burial, and resurrection; and we are saved today by looking back to it?”

Actually, that wouldn’t be a completely true statement. Did Abram know about the death, burial and resurrection? Did Moses? How about Adam and Eve? The average Israelite? I would argue that none of these (and even the prophets) totally understood a complete picture of the gospel enough to “look forward to the cross.”

Well then what did they understand?

In some of our circles, the term “progressive” anything has become a dirty word (and I’m not talking about insurance)! Like it or not, God’s revelation of His plan for salvation to mankind has been progressive. That simply means that Abraham had a more complete understanding of God’s redemptive plan than Adam, Moses more than Noah, and Isaiah and Daniel than King David. As God’s plan (and the gospel) came into sharper focus with each inspired word of prophecy, so the content of faith has changed.

First Peter gives us a hint that even the prophets didn’t completely and perfectly understand what we know as the gospel, else they would have preached it! It was just simply not revealed at that point in time (even though it is the only basis for salvation). “Of which salvation the prophets have inquired and searched diligently, who prophesied of the grace that should come unto you: Searching what, or what manner of time the Spirit of Christ which was in them did signify, when it testified beforehand the sufferings of Christ, and the glory that should follow. Unto whom it was revealed, that not unto themselves, but unto us they did minister the things, which are now reported unto you by them that have preached the gospel unto you with the Holy Ghost sent down from heaven; which things the angels desire to look into,” 1 Peter 1:10 -12.

So then, in whom or what did the prophets, believers, and saints of old put their faith? We will call this the “content” of salvation.

As God’s revelation to mankind has progressed, the content of man’s faith has changed. It has always had however, two common themes: sacrifice and promise. From the promise of a redeemer in Genesis 3:15, to the promise that God would “provide Himself a lamb” in Genesis 22:8, to Isaiah’s prophecy that the Messiah would die a substitutionary death in Isaiah 53, the revealed content of faith has changed. To put it simply, “The issue here is whether man will take God at His word and exercise faith in the provision for salvation which He has revealed.”6

For Abraham, as mentioned in the beginning of this article, it was believing in God’s promise to give him an heir from his own bowels, and that his descendants would be innumerable. As time went on, this content has become clarified. Once Jesus came, this content became crystal, clear. Ever since Jesus completed His work of redemption on the cross, the basis of salvation and the content of faith are one and the same – the death, burial, and resurrection of Jesus the Messiah as the substitute sacrifice for our sins.

Have you accepted His death, burial, and resurrection by faith? Have you trusted Jesus as your Savior? If not, you can trust Him to save you from the penalty of your sin, today!

6 Mark Robinson “How were People Saved in the Tenach?” Lesson 3, Jewish Awareness Ministries School of Biblical and Jewish Studies